Arabian Center Calls Out to 20,000 residents to Celebrate Unity

Arabian Center, Dubai’s leading community mall, rev up the National Day exhilaration by urging residents to come together to show their love and appreciation for the beloved United Arab Emirates. Kicking off on Sunday 12th November, the mall is set to reincarnate the country’s most visible symbol of statehood, national unity and resilience- the national flag, using the Japanese art of origami.

With an aim to demonstrate the unity and diversity that the many nationalities, culture and traditions represent in the great nation, Arabian Center alongside 20,000 residents will be seen creating beautifully handcrafted origami paper pegs, where each peg is made by a different Nationality. Each paper peg will then be intertwined to form the national flag, seamlessly symbolising unity amongst different nationalities, and will be testimony to the strength of the Union and the patriotic fervour in the hearts of the residents.

Commenting on the project, Tim Jones, COO of the Arabian Center, said: “The UAE is a melting pot of cultures from individuals drawn across the world. We, at the Arabian Center believe that it is important to pay homage to the UAE, a place we call “home”. Toward this end, we have introduced the National Day program, through which we call upon each and every one to show their gratitude and appreciation. We look forward to hosting patriots and UAE lovers alike to come together and reminisce how far the nation has come.”

Estimating the use of over 20,000 pieces of paper, which will be meticulously folded over 400 hours of work, the Arabian Center aims to foster a sense of gratitude and heighten the 46th UAE National Day celebration through this activation. Working hand-in-hand with the residents, the mall will display the completed structure by National Day (holidays) at the Night Court of the mall. 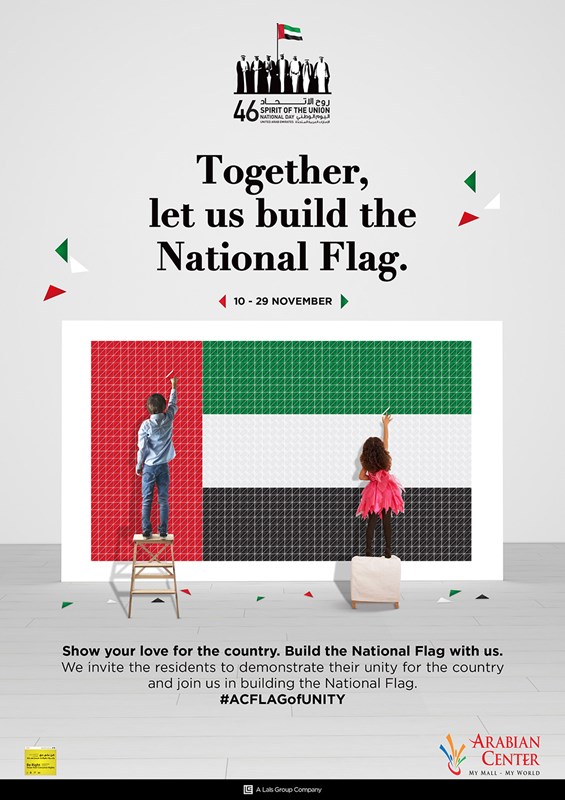